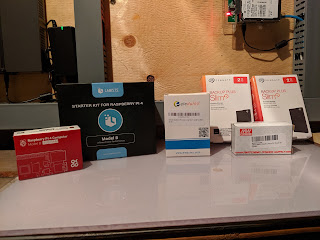 a new year, a new decade. which means its time to build another gadget.

i received a raspberry pi 4 (4gb ram) kit for christmas. i also received 2 2tb hard drives from a "dui darlene" and a "dui dave" (?who the fuck are you guys? oh right just some dope names i made up so i could get some sale items for myself hohoho), as well as a cool aluminum CNC case with dual fans. the idea is to create a new NAS backup device to archive my growing camera archive, along with any other sensitive data. i have created a device previously that uses a single hard drive to download the photos and videos from my google photos library. i also already have a single bay WD NAS device that i primarily use to my day to day data. currently, once a month, i connect a hard drive to the WD NAS and do an incremental backup. it works. however for this next device, i want to have 2 copies of everything, and potentially install this somewhere in the world for remote backups in case of a disaster where my data currently resides. also need this automated! 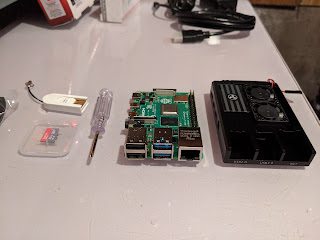 so far i have everything connected and have been doing some tests. openmediavault (the OS i will use for this like the previous device) does not support RAID setups that are connected via USB. shitty because the raspberry pi 4 uses USB 3 and can handle the faster transfer rates no problem. instead, i have resorted to using rsync daily to mirror the contents of drive 1 to drive 2. 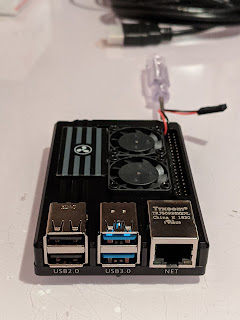 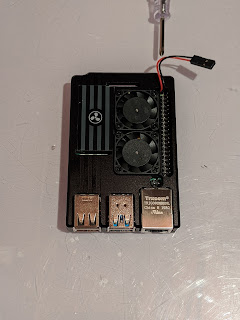 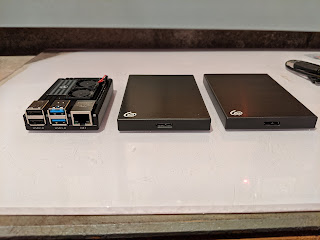 i have purchased a 5v 5amp DC power supply to power the raspberry pi and the hard drives. while i dont really want to, it is easier for me to use a powered USB 3 hub to connect the 2 hard drives, as it can power the drives with no problems. this hub will connect to the power supply. i want to get a little fancy and install a socket for the AC cable to plug in, with an on/off switch to control the power. i havent put much thought in how i will package/case the whole thing. i was thinking about using plexiglass again as i have standoffs from the last project that i can use.