Posted by afxnet.net on April 10, 2013
this is going to be a long post as there is some backstory to explain.

before christmas 2012, my sister ended up dropping her nexus 7, and as a result, the glass/digitizer had cracked. my mother ended up giving it to me in hopes of me fixing it.

well, when i received the unit, i initially thought that it wasn't a big deal. but after charging and powering on the device, 3/4's of screen would not recognize any touch input. so at this point, what do i do with it? keep it?

keeping it wasn't a bad idea. i searched for replacement digitizers on ebay, hoping to find something good, but i only found overpriced parts. the reason for this is because the glass is fused to the LCD panel. not too happy about that. at this rate, it would make more sense to purchase a new nexus 7 tablet. but i didnt want to.

i'm not the guy to throw something away if it still has use, and that is how i viewed the broken tablet. i am not in a position to drop a bunch of money on a new tablet to make it functional. so, i thought about how i could make use out of the tablet that has a cracked screen and doesnt recognize touch input.

micro usb otg cables have been around for a long time and extend the functionality of your android device. for example, you can plug in a USB flash drive and access the contents from it, or even a USB to ethernet device to have wired connectivity (depends on kernel but reported as working). at the time, i didnt feel like ordering one from amazon because i didnt want to wait for it. i had the urge to experiment right then and there.

i googled up how to create your own micro USB cable, and within a few moments, i had a working cable. i plugged the cable into my personal nexus 7 tablet with my wireless USB keyboard/mouse adapter, and all of a sudden, a mouse cursor appeared. and, as assumed, the keyboard worked great. in fact, i am typing all of this on it right now, on the broken nexus 7 tablet.

ultimately, the cable ended up breaking. but not before i ended up rooting the broken tablet, flashing TWRP, flashing paranoid android v2.54, and finally being able to interact with the OS on the broken tablet for once since i received it. this is awesome. other than the cracked glass preventing touch input, there is nothing wrong with this unit whatsoever.

just now, i took it a step further. i ended up plugging in a usb hub into the (now working) nexus 7 tablet. connected to it was my wireless USB keyboard/mouse adapter, an 8GB USB flash drive, and my external 160GB hard drive. using stickmount, i was successfully able to mount both USB drive and browse the contents to my hearts content. and, with all of this going on, the mouse and keyboard were also working.

so there you have it. i have bigger plans for this unit, but ill cover that later. 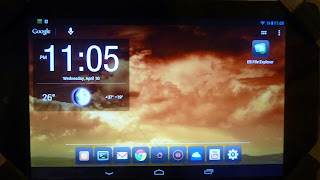