Posted by afxnet.net on September 09, 2012
it's been a year since i have updated this. so hello to anyone who has read this.

i have moved out of the jam space since we have decided to take a break as a band. solecism played 2 shows this year. the result of non-stop practice. we want to start recording in the future and spend less time playing shows. the band was initially supposed to be a jam and recording project anyway.

i have since set up my drum kit at home upstairs and play them on the weekend. i don't have them all set up though due to the space i have. i could set the rest up i suppose but i don't require it. the setup i have going now is different and i like it. i could almost get used to it for playing with solecism. i haven't been jamming too much metal since the break started. i have been just screwing around trying different things on the drums that i normally don't do. definitively fun and challenging for sure. 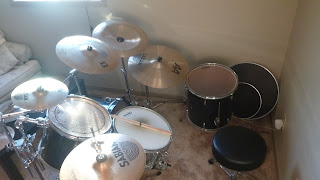 the other day, i decided to finally sell my ipad 2. it was a long time coming. i enjoyed the device, not to it's full potential however. when i first purchased it, i was more into it. i was always looking around for cool things to do with it. such examples are editing photos, playing an intense game, or remoting into my server. i sold it because i have also decided i no longer want a device that has a 10' screen and instead, opt for something more portable. i want this device:

the google nexus 7 made by asus. it has a 7' screen and it's small. i have to admit, it doesn't have nearly as many tablet-oriented apps compared to the ipad 2 and the app store, but i am fine with that. for the apps that i need, for editing the odd photo, enjoying a game, or checking my server, they all exist for android. i wanted to try another operating system too. so, i ordered the nexus 7 today and it should be here sometime this week.

other than the above, life has been okay. just getting by with it and everything else. the wife and daughter are doing great and we're a pretty happy family. it's been 1 month and 9 days today that i have quit smoking too. i have been running a lot at night and sometimes in the mornings on the weekends. i am glad i got back into it. i can feel the difference in my lung capacity and stamina. i ended up buying a sony walkman for the running sessions, instead of an ipod. im done with apple stuff i think for now. the ipod touch's' sound quality is crap compared to the sony walkman.

anyway, im out. have a good one.